According to tradition a monastery was founded here in the 6th century, by Theodomir, king of Suevi. It was the fulfillment of a promise, to cure an illness of his son. The construction of the church was very fast, which became known as “Cito Facta” [made early], currently Cedofeita. Theodomir and his son, Ariamir, were baptized here by São Martinho de Dume. Then they did the Catholic Christianity the official religion in the northwest of the Iberian peninsula – where was the kingdom of the Suevi.

The first written records of this church date back to 1087. At 12th century the church was completely rebuilt, and in 1742 there was the last reconstruction, changing its design to what we see today. 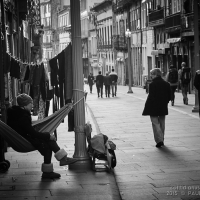